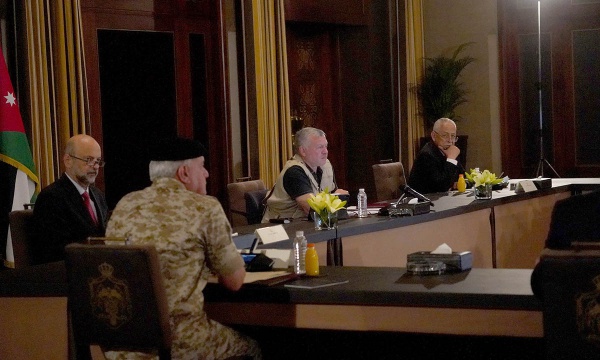 His Majesty King Abdullah urged focusing on the pharmaceutical, medical supplies, and food processing industries, while expanding to other strategic, value-added sectors.

Attending part of a follow-up meeting at Al Husseiniya Palace for the steering committee on the pharmaceutical, medical supplies, and food processing industries, the King said Jordan has the potential to become a regional hub in these sectors, according to a Royal Court statement.

During the meeting, attended by senior officials and a number of journalists, His Majesty stressed the need for laws to facilitate work in these sectors, calling for increasing exports and promoting national industries abroad.

The steering committee was formed by Royal directives in mid-April, with members from the public and private sectors.

The King listened to briefings by the heads of the panel’s three sub-committees, covering progress in implementing previous plans, as well as highlighting plans for projects currently under implementation, the statement said.

The heads of the sub-committees also outlined the main indicators for each sector, in terms of exports and imports, as well as the number of companies and job opportunities, and expected expansion in each industry.

For his part, Prime Minister Omar Razzaz said His Majesty directed the government to turn the challenges imposed by the coronavirus disease (COVID-19) crisis into opportunities, noting that the industrial sector managed to capitalise on these opportunities.

Razzaz stressed the importance of moving forward in this direction in an institutional manner, noting that work is under way in partnership with the private sector, as well as research, academic, and financing institutions, according to the statement.