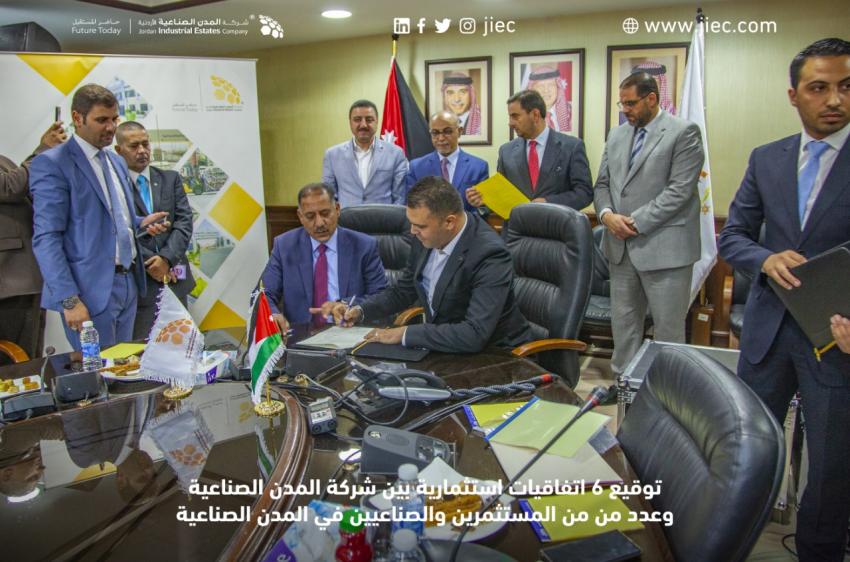 Following a Cabinet decision to lower prices and rent in Tafileh, Madaba and Salt industrial estates under certain conditions, the Jordan Industrial Estates Company (JIEC) was able to attract six industrial investments in Salt and Madaba within less than a month of implementing the decision.

JIEC signed six investment agreements with two Jordanian investors, one Iraqi-Jordanian joint investor, a Yemeni, and a Syrian investor at the Ministry of Industry, Trade and Supply.

During the signing ceremony, Minister of Industry, Trade and Supply Tareq Hammouri said that the investment volume for all six investments stands at JD7 million, and are expected to provide over 160 job opportunities in their first phases.

JIEC CEO Omar Jwaid said the investments are the first in the new industrial estates and are a result of JIEC's efforts after the implementation of the Cabinet decision to lower rent and sale prices in those estates.

The decision also stipulated that the industrial company must have at least 10 Jordanian employees, registered with the Social Security Corporation from the start of the investment.

Two of the Jordanian companies in Madaba will specialise in foodstuffs as well as aluminium stands and lighting units that work on solar power.

The Yemeni investor voiced his interest in the pharmaceutical industry while the Syrian company will focus on construction.

Jwaid said the companies have achieved the different conditions and investment approvals to benefit from the exemptions and advantages.

For his part, JIEC Chairman Loay Munir Sehwail commended the government's decision that allowed the JIEC to announce the investment incentives in the new industrial estates.

For their part, the investors voiced their appreciation for the incentives and voiced several concerns, which the minister and JIEC management promised to look into.